I have this great opportunity to review a new book, Socialpunk, and today I’m sharing an excerpt with you before I post my review as well as a great giveaway! 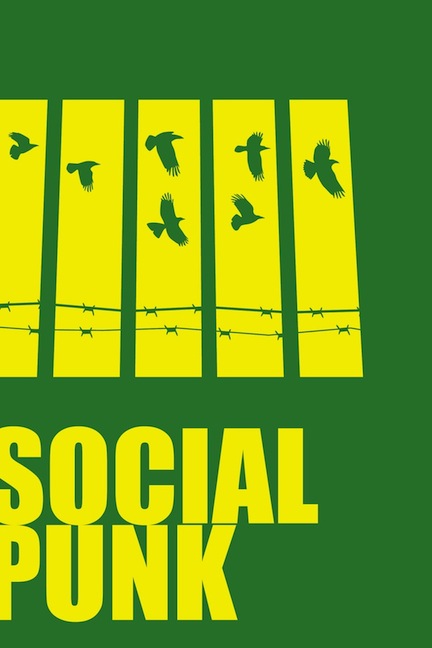 And now for the good part! This excerpt is the prologue from Socialpunk.

After playing God for six years with the world he created, he couldn’t control any of his subjects, none at all. Over the years, he had watched them evolve and become the sum of their own choices rather than the sum of his; and for that, he regretted ever giving them life.

A small, blinking red light from just inside his eyelid reminded him of the news they sent him earlier that morning. The company had cancelled his funding and would shut down his project within three months. According to them, the project cost too much and took up too much space, and the inconclusive results couldn’t be published reputably, now or in the future.

Six years of his work, tens of thousands of lives at stake—and he could do nothing to save any of it. He bowed his head, letting his chin rest on the rim of his breakfast smoothie. The smoothie reeked of powder—crushed pills—but he supposed he had better get used to it. He wouldn’t be able to afford the luxury of real food after they canned him.

He closed his eyes and called up the camera view of one of his favorites, number 3281. She fascinated him; he couldn’t deny it. When he had designed her, her pre-teen rebelliousness lit fire in her eyes. A survivor, he’d thought. He’d meant for her to have it all—to grow up, to get married to the love of her life, and to have a beautiful family of her own someday.

He looked at his last and final creation sitting in the chair across from him—his own son, not awakened yet. The law forbade him to have any children of his own, so this boy would substitute.

But he had done the unthinkable with this creation—he had bestowed on it his own thoughts, emotions, and decision-making processes. He’d given the boy his own mind, his own physical characteristics, his own wants and desires.

He had never done so with any of the others because of the dangers of investing too heavily in any one of his subjects. But who could he kid? He had not stayed objective thus far, watching some of his subjects more closely than others, wishing for the happiness of some at the expense of others. He had become an abomination, a monster of his own doing, who had created subjects only to watch them suffer.

He couldn’t forgive himself; not now, not ever. His eyes lingered on the vial that sat next to his breakfast smoothie, that he’d stowed away for the day when they destroyed all his work, his entire world. He would save it, tuck it away for now, for as long as he could protect them. When things spun out of his control, he would drink it and end himself the way he had ended them.

In the ancient stories, gods frequently gave their sons as gifts. Now, he would give his son as a gift to her, number 3281. So she could be happy in her last months on earth, before they destroyed her with the rest of them.

About the author of Socialpunk.