Last weekend we had a huge lunch at Red Lobster and when dinner time rolled around nobody was really hungry. Right.

Knowing better I figured I’d make something small and appetizer like and in came the chicken bruschetta recipe I created. 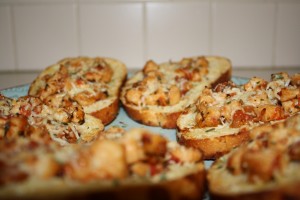 When I made this I totally winged it! I knew what I wanted the end product to be and went from there. Below are all the ingredients that I used but feel free to change it up and make it your own!

Preheat oven to 375 degrees
Heat olive oil in a pan & saute shallots, garlic, and chicken. Once the chicken is mostly cooked add in the tomatoes and cook for another minute or two.
Pour in the wine and cook until it’s mostly evaporated.
Season with salt, pepper, and basil.
Place the bread slices on a baking sheet and put a spoonful or so on each. Top them with the shredded cheese and drizzle with a bit of olive oil.
Bake for about 10 minutes or so.

This weekend as I was going through the new posts on the blogs that I read there was one that I found very intriguing. It was a recipe for an easy, dark bread.

The recipe was for Anadama bread, which is a traditional New England bread that’s made of corn meal, molasses, and bread flour. The recipe has been around for many years and even has a myth as to how it got it’s name to go along with it.

“A fisherman, angry with his wife, Anna, for serving him nothing but cornmeal and molasses, one day adds flour and yeast to his porridge and eats the resultant bread, while cursing, ‘Anna, damn her.'”

The bread is extremely easy to make and requires no kneading at all! Mix it, put it in the pan, and then let it rise! How much more simple can it get? The result is a sweet, slightly dense bread that is very good warm from the oven, toasted the next day or even the day after that. I served mine the day after it was baked, warmed up in the oven with butter and homemade strawberry jam.

My sister and brother in law came over for brunch on Sunday and I thought that this was the perfect time to make this bread since it makes two loaves. And we’d definitely go through at least one of the them and the rest would make it to the office (which it did). My family and co-workers all loved the bread. This is one that I will make again and again.

The recipe that I used came from a great blog that I read daily, Simply Recipes. She has many great recipes as I’ve mentioned before.

Try this recipe and comment on what you thought about it! I’d love to know!