It started with something small on his leg…. Marvin the Martian. You know the cute little green alien from the Bugs Bunny cartoons.

He was 15 at the time and had to have his mom sign for it.

It didn’t take long for the addiction to grab hold of him. The need for the rush as the needle brushed across his skin, the colors lighting up his flesh, the search for the perfect image, or the the person that could make it all a reality.

All to soon he was gone to bootcamp. He was now a Marine.

Next came the Marine bulldog, the UPC code on his neck with his birthday for the numbers, and the dog tags complete with his information wrapped around his rib cage.

He was stationed in Atlanta and quickly became friends with a guy that would be a life long friend and his personal tattoo artist.

Arms, legs, chest…. they were all covered in splashes of brightly colored art work. One after another they added up until you couldn’t tell where one started and another ended.

Was he judged? Probably.

A better question was did he care? The answer is a resounding no. Then again he’s never cared what others have thought of him.

Is he done now that he has a job as a professional chef, a husband, or a parent? No.

I’m proud him no matter what because he’s my little brother….. even though I have to look up at him! 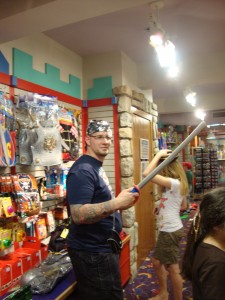